With the weather calling for showers all week, Saturday, April 19th defied expectations and dawned bright and beautiful for the 5th annual Traprock 50K. For the four or five months leading up to the race, I'd been tremendously excited. I last ran this race in 2011 and loved it, but I've been steadily injured and/or overtrained ever since. My new job coaching swimming has happily forced me into a much more sane running schedule. No more two-hour evening runs on top of long morning runs, no more insane weekly mileage. I swim more, run less, and almost never run at night. Lo! these past six months, I have (banging head against desk here) been injury free.

Traprock is a perfect early season race for me. The starting line is just over an hour from my house. The terrain is wonderfully challenging, rugged and steep (Simsbury, Connecticut! Who would believe it?). And the relentlessness of the rocks and roots keep me rolling along at a 12-14 minute per mile pace, which is perfect at this point in my minimal training.

Sounds like I wasn't even running, doesn't it? Sounds like I was out there puffing through a brisk Sunday stroll. Suffice it to say, this is a tough course. (Or as they say around here, tuff coss.) And of course I'm getting older. Turns out I was operating that day with an unprecendeted, peri-menopausal (I'll spare you the details), near-calamitous lack of iron in my blood. And I was coming own with a cold.

This race consists of three 10-11 mile loops through Penwood State Forest. Despite what follows, I absolutely love this course. The first four miles are, to my mind, the most challenging. The hills are steep and the footing dicey. Granted, we're not in the mountains here, far from them unfortunately, so the climbs are relatively short, but crazy, hands-on-knees, I-think-I-can-I-think-I-can steep. Up and down; up and down. For a runner of my hill climbing caliber (poor, I live in a flat place) it was difficult to get into a rhythm. There are no long, runnable sections. Peace must be made, especially on the first loop, with the somewhat deflating notion of walking big stretches of trail. The first four miles went something like this: walk up; get out of breath; jog a bit at the top; start running down; stop and pick your way carefully down deadly, rocky cliff face; jog a bit; repeat, repeat, repeat...... 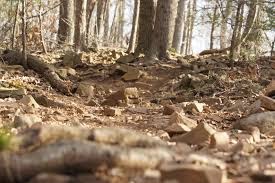 The runner (in this case, me) then emerges on what had been described to me as a carriage road. Goddamn. I pity the hapless passenger forced to travel this rucked and rutted path in anything less than a full suspension tank. Believe me when I say no carriage has ever passed over this road and survived. The trail is strewn with every size and shape of rock known to man, all tossed willy-nilly from the hand of some dreadful, Ice Age god. And to make matters even more challenging, the whole business is laquered with several layers of decomposing leaves. Just to keep you guessing.

And it's all uphill. At least as I remember it now: all uphill. The grade is runnable. Or at least trot-able. I trotted. Some walked. I'm sure the frontrunners ran lickety split from bottom to top.

After a couple of miles, this satanic carriage road dumps you onto a lovely stretch of single track. This is my favorite part of the course. The trail follows a ridge looking out toward the wilds of Northern Connecticut, occasionally dipping down to cross a friendly stream over a bucolic wooden bridge. The view from the ridge, on this particular day (sunny, 50-60 degrees, wind, no leaves to block your line of sight) went on for miles. I could have run on this stuff all day.

The penultimate  section of the loop was described to me as a paved road. Yes, there was pavement, so I suppose this road meets the minimum definition of paved. There was cement involved. But it was all over the place. This paved road was almost scarier than it's evil couisn, the carriage road. It was raised down the middle by a couple of feet, and the pavement fell away in chunks to either side, heaved by the countless frosts of many bygone winters. I stumbled and stubbed more on this section than anywhere else on the loop.

The last mile or two re-runs the first mile or two in the opposite direction. You can see the runners ahead of you striking out on their 2nd or 3rd loops while you struggle up, down, up, down back to the start/finish. The crowds down there make it all worthwhile. They announce your name and hometown and send you back around with a big hooray. It's just the sort of boost you need as you haul your tired self back up that first lung-busting hill.

My race started very slowly. My legs felt inexplicably heavy throughout the whole first loop. I couldn't really catch my breath (lack of iron?), and my legs burned on even the slightest uphill, let alone the big, steep climbs. I didn't have any spring for the downhills either. All in all, that first loop was a sluggish, lackluster effort.

The second loop went much better. I was breathing easier, though blowing my nose constantly into the soggy Buff headband I had twisted around my wrist for that purpose. My legs finally lightened up, and I felt like I could jog some of the hills I had walked during the first loop. I guess you know you're destined to be an ultra runner when it takes you 11 hilly miles to warm up. I passed several people on this loop, which was a nice psychological hit after having half the field blow by me on the first loop.

Toward the middle of the second loop, I felt all of my downhill muscles starting to quiver. (Indeed, they're still sore today, four days later.) I stumbled badly on the beautiful singletrack section (it's always those harmless bits of trail...), just catching myself before carooming face first into a boulder the size of a minivan. It was after this near-fatality that the little voices started up in my head:

Drop out after this loop.

You've been out here long enough.

You're not trained for these hills.

You're perimenopausal; catastrophically low on iron.

All these other runners have so much more iron than you do.

Don't get injured on the first race of the season.

You could do PErmaNEnT DaMAge!

I hate those voices. I did my best to ignore them. I focused on the positive: beautiful day, out here by myself in nature, people cheering for me (how often does that happen?), not dead last. And then as I picked my way down the "paved" section, the winners started passing me. These guys were finishing their third loop, and here I was grommetting my way through the second.

Jig's up, baby. You'll never finish at this rate.

You'll keep all these nice volunteers from their warm dinners.


It cannot be entirely accidental that the final yards of this course are all downhill. Those last glorious leaps (or whatever) back down to the start/finish tend to wipe the memory clean. After finishing my second loop, I grabbed a couple of chocolate Gu's from my drop bag and without giving it a second thought, trudged right back up that goddamn hill for the third and final loop.

No more voices. No turning back now.

My only goal at this point was to finish before dark and stay on my freaking feet. It was so hard to pick them up high enough to clear the rocks and roots. So difficult; yet so necessary. I don't remember much about that third lap I was concentrating so hard on staying vertical. All of the aid station people were super nice to me. I could tell I wasn't making much sense from the kind, cock-headed expressions I was getting from most of them. I had a nice stroll down the "pavement" section with my friend, Joe, who was working the last aid station. I remember that. And I remember standing for a couple of seconds at the top of the last hill of the course, gazing down through the grey tree skeletons to the lake and the finish line below, listening to the cheers, just drinking in the enormity of the whole thing.

There are many people to thank for this wonderful day. To the race founders and directors Steve and Kevin: thanks for this amazing course and for all the weeks and months of work that went into this race. It could not have gone better for me. To Jim C: thanks for sharing some miles and talking books with me. That did me a world of good on that difficult first lap. To Joe L: thanks for the water and the walk and the happy smile every couple of hours. To all the volunteers: you were amazing. And to Jerry T and Kerry A: thanks for timing the race and for all the encouragement.

My finish time was something like 7:26, which was half an hour slower than three years ago. It sounds freakishly slow to me now, but it's all I had in me for that course on that day.

This race is now part of a larger Connecticut trail racing circuit called the Blue Blaze Trail Running Series started by Scott and Deb Livingston. It looks like a great group of races, all different lengths and degrees of difficulty all over the state.

My other blog: 15-minute instant fictions